Photos of both sides of a partially finished green knit hat with multicolored string and remembrances attached, created by an interfaith minister and the couple's close friends and family following an adoption loss.

"[After her birthmother reclaimed her,] we asked our friend, who is also an interfaith minister, if she would help us do a ritual to say goodbye to her. So, we invited the people who had met her to the house. We did it in here ((gesturing around the room)) …. I had looked all over the place for things like-, what do you do when you’ve lost [a child you planned to adopt]? There are no ceremonies, there was nothing out there that I could find to figure out how to mark this. And we felt like we needed to do something but didn’t want it to be huge because our pain was so intense. But we felt like we needed to do something to send her on her way, not only to say goodbye to her for us but also to kind of keep her getting the energy she got when she was here, to handle [the situation] she was going to be in."  (click image to see more description) 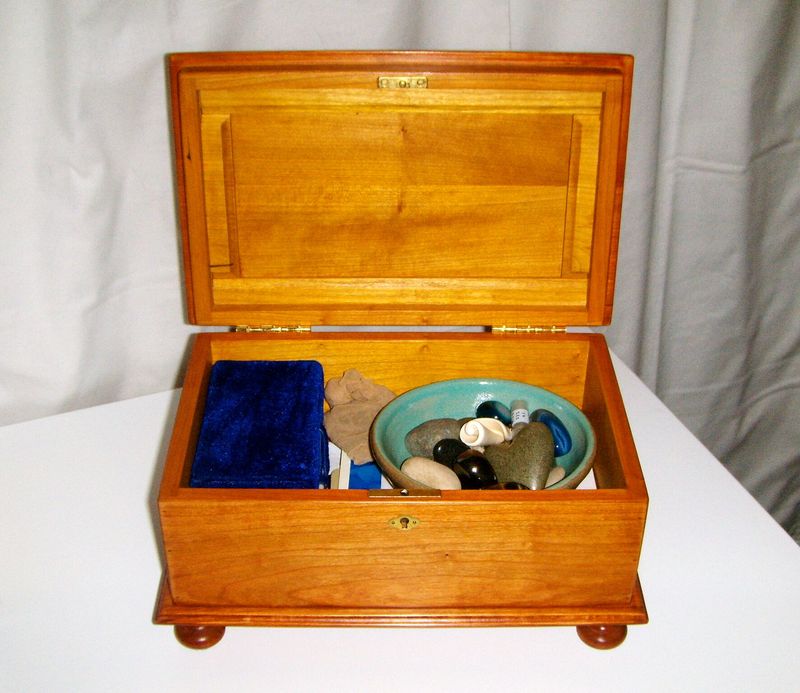 Photos of a memory box and its contents, created by a queer couple in honor of their stillborn daughter.

"A carpenter [made the memory box] and we got it less than two weeks after we lost her. It’s this beautiful box ... and we found a tiny urn. We still have her ashes in the box in the urn. We got a bowl and we had ten people at her memorial, and we had everybody bring a stone or some little thing that they wanted to contribute and they all put the things in the bowl. So, we have this bowl with [the] energy and things that people bought, which is really beautiful and we had extra little cards printed that people wrote on." (click image to see more description) 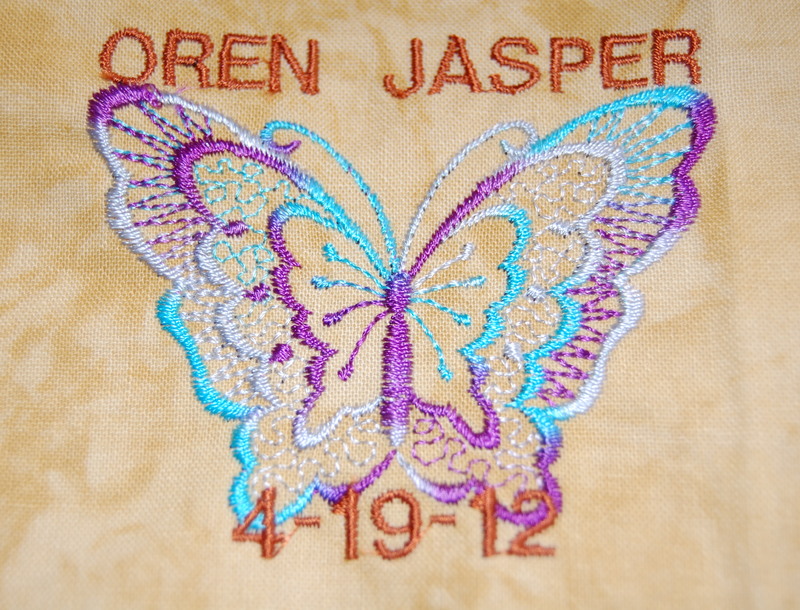 Photo of a quilt patch with a blue and purple butterfly and the text “Oren Jasper 4-19-12” (name included with permission), created by a non-gestational mother's family members.  See also the couple's Free Library, created in honor of their two sons.

"[Because I carried our child,] I think it often gets overlooked that he was [my partner’s] son too and that makes me really sad. But one of her family members really got it. Her grandmother has an enormous quilt on her wall, and it has the family tree on it. They put Oren on the family tree as [my partner’s] son. They got that he was her son too." 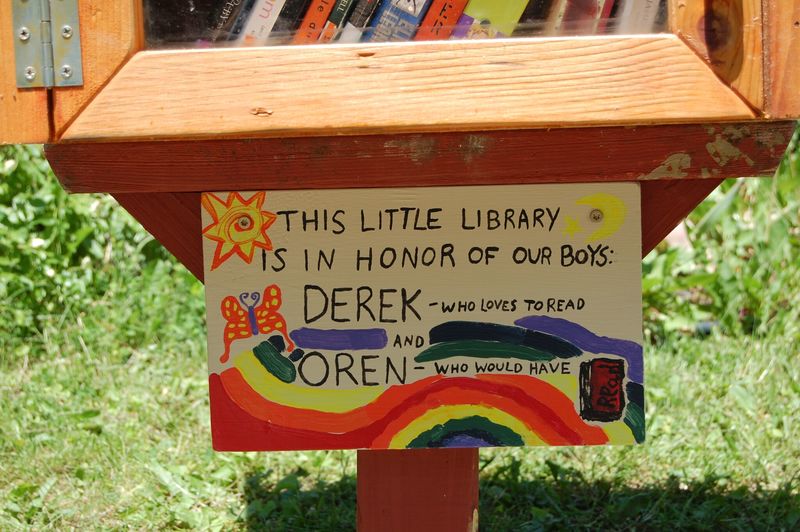 Photos of a Free Library with a sign that reads “This library is in honor of our boys—Derek who loves to read and Oren who would have” (names included with permission) and memorial garden filled with flowers. See also Quilt Patch.

"We [put up the library] in honor of Oren and filled it with children’s books for the neighborhood kids [and planted] a beautiful garden behind it." 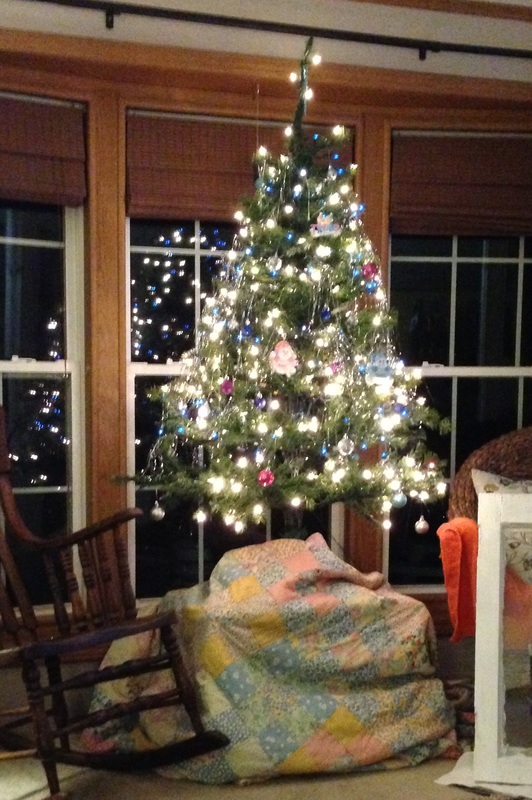 Photos of icicle memorial ornament at the top of a Christmas tree with white lights, placed by a lesbian co-parents to honor the daughter they lost prior to the birth of their twins.

"We had been given an icicle ornament [by a friend] to represent the loss of a child, the loss a baby…. We didn’t have anything to put on top of the tree, so we got that icicle ornament and put it at the top …. Her ornament is at the top of the tree and the tree is like sprinkled with tons of stuff from the twins [who we had a year later], you know the daycare made ornaments and kids crafts … and they’re not even old enough to walk ((laughs))." 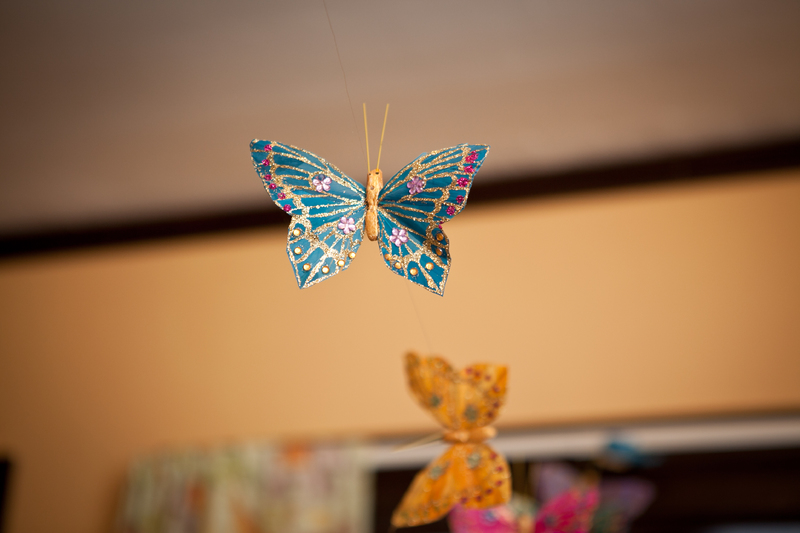 Photo of multicolor silk butterflies on a clear string in a tangerine colored room, contributed by Christa Craven and Brenda Murphy.

"This string of butterflies hangs in our twins' bedroom to honor our first daughter Lily's presence in our lives. We had initially bought it for Lily’s nursery a few weeks before she left us. Although the meaning behind this commemoration is primarily for our immediate family and a close circle of friends, we were struck by this photograph that our friend, fine art photographer Arielle Doneson, snapped when she took photos of our twins a few months after they were born. This image became a comfort for both of us, especially in the absence of more tangible memories of Lily, like pictures or personal items, which many of us don't have following pregnancy loss. As I did research for this project I learned that butterflies are a common symbol that bereaved parents use to commemorate losses. The multiple colorful butterflies also reminded us of the rainbow pride flag, which seemed fitting since our twins were our 'rainbow babies,' a term I learned from other bereaved parents that is often used to describe children born after pregnancy loss. I sometimes joke that we actually have 'double rainbow babies,' born after we lost Lily and into a queer family."

return to top of page